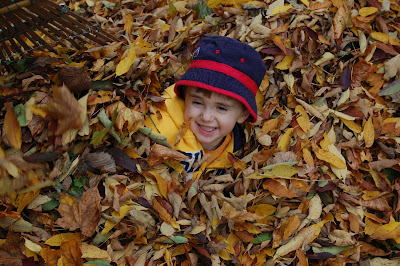 The two kiddos as 12 Dodge have been in rare form lately. 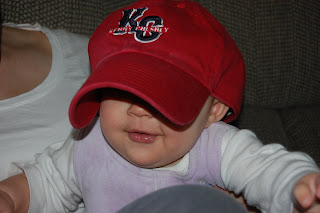 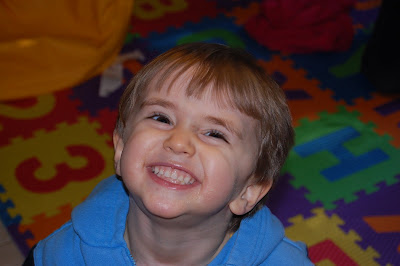 Amidst testing his limits with his sister, Andrew has still found time to be a cute little dude. One of his favorite things to do lately is rake the leaves, or shovel them for that matter! He likes for me or Pete to blow the leaves while he rakes them...and rake he does. He rakes the leaves on the ground, and is actually getting quite good at putting them in a pile now too. But leaf-raking doesn't stop there. It's really not complete unless he rakes up on the platform of his slide, and it's definitely not complete unless he carries his rake with him as he climbs to the top of the slide. You never know how many leaves could have fallen onto his slide while he was climbing up! It is so cute. 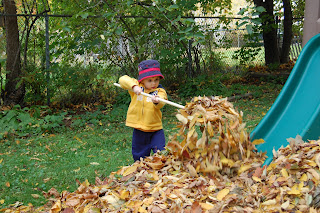 We have also raked a huge pile of leaves at the bottom of his slide so that he can slide down the silde into the heap. As the photos prove, this is quite a riot. 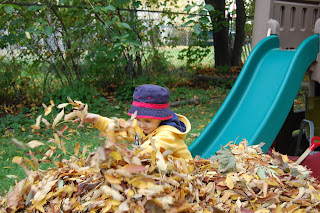 Natalie is also loving the outdoors this Fall. We have gone for quite a few walks outside and she just loves to be out there, admiring the leaves, while relaxing like the super cutie that she is. She gets herself into a coma-like state, but then always snaps out of it to give me huge smiles whenever I come around to the front of the stroller for a peek at her cuteness. 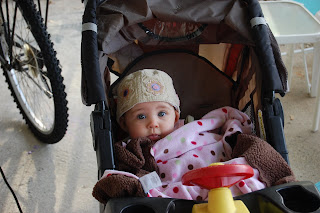 Natalie is also experimenting with food now. She finally realizes that opening her mouth is a good idea so that we can get the food into her mouth, but she doesn't always keep it in her mouth. She also has this new front to back bobbing-head action going on that makes you fear that you'll shove the spoon through the back of her throat on a big bite. She also likes to try to grab for the spoon and put it into her mouth by herself, which makes feeding her more of a challenge than we remembered from the other cutie. So far she has eaten rice cereal, oatmeal, pears, sweet potatoes, squash, green beans, and avocado. Pears are definitely her favorite, with the green veggies at the other end of the spectrum, though she does eat them. 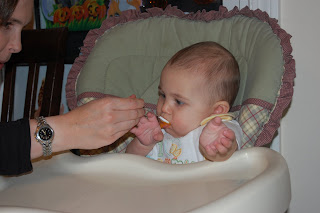 Natalie has also started drinking from a sippy cup. It just seems impossible to believe that she is old enough to be doing this, but she does. She hasn't mastered the technique yet of only sipping the quantity that she can manage to swallow, but what fun would it be if she couldn't spit it out all over her clothes and high chair tray?! 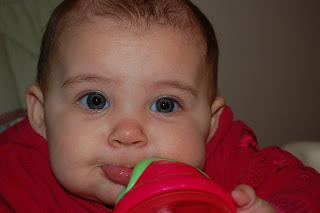 Little Miss Cutie Pants is crawling up a storm now too. She thinks she is so tricky when she crawls herself all the way over to the entry way or to the door to the kitchen hallway. She typically stays in one room so far, but she does crawl all over within that one room. She likes to do the side-sit as well, as this photo shows. 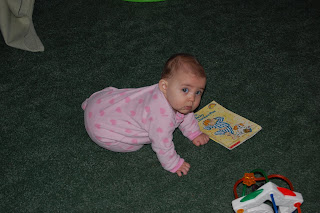 Natalie has also started to laugh in the cutest ever cough chuckle. Most often she laughs at her brother, or at some object being shaken and moved toward her face. She also gets excited if you "ignore her" and then return your attention to her!


In other George outings, we went to a Touch-A-Truck program in Portsmouth a few weeks back. I can't think of anything Andrew would like more. They had over 30 different trucks, tractors, and "things that go" for kids to climb up on, drive, honk the horn, you name it. His favorites were probably the school bus and the garbage truck. For those who are unaware, Andrew has had an obsession with garbage trucks for about a year and a half now. Last summer we would get outside bright and early on Monday mornings to catch a glimpse of the garbage truck as it made its way down Dodge Street. This year Andrew is only occasionally up and out of his crib when the g.t. comes, but if he is up we drop everything and run to the door as soon as we hear it coming. 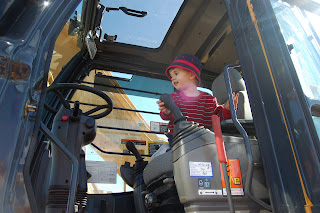 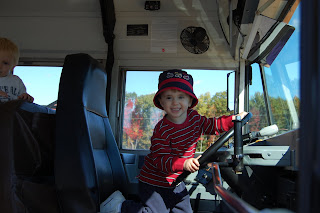 Natalie enjoyed the Touch-A-Truck too! 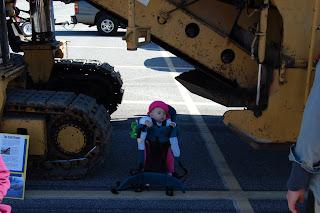 We also went to the Fall Festival at Butternut Farms a few weeks ago. Auntie Sheila went with us to pick some apples and to spend some time with the cuties. It was a good thing that the kids were able to come through with the cuteness, because the apples certainly did not. Even with Pete's go-go gadget arms, there were few apples to even reach. We picked every apple we laid our eyes on and ended up with maybe a dozen apples. Some were so high up that Daddy had to have Andrew fly to get them! 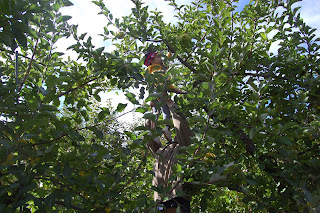 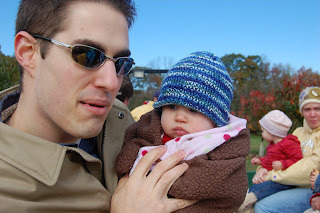 Natalie being a little sweetheart on the hay ride. 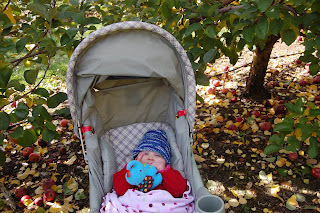 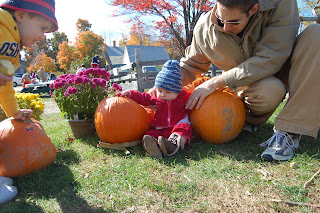 Probably the best part of the day for Andrew was the opportunity to have his first-ever caramel apple. They had a big crock pot of caramel and you could dip your apple in. Not wanting Andrew to miss out, I foolishly dipped the whole apple in (unlike other more wise parents who only dipped in the top). Well, I wasn't anticipating that the caramel would remain in the oozy form, never to harden, nor was I anticipating Andrew holding onto the darn apple for so long. 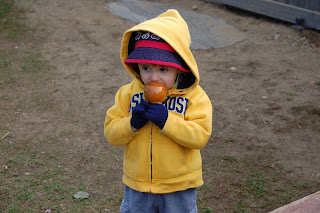 By the time he finally finished the apple his gloves were literally dripping with caramel. Thankfully I had put little gloves on his hands to protect him from the 40 degree weather, because he absolutely hates to have gook on his hands! 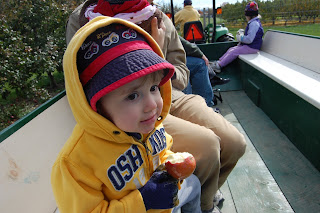