Take a chance, make it happen

Pop the cork, finger snapping...For those who enjoy going to Foxwoods, you may know this catchy tune that they once (and may still use) in their advertisements. Any time Pete and I go to Foxwoods we sing this song on our approach to the casino. Our singing on our last trip to Foxwoods was filled with anticipation for a different reason, however. 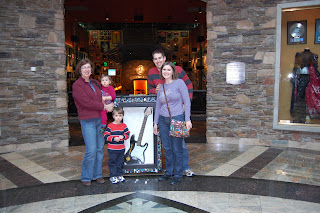 For Pete's 30th Birthday he and I went to Foxwoods for the night for a little grown-up fun. We had a great time, came home winners, and joined the new "Dream Points" club, formerly known as the Wampum club. About a week after our little getaway, we each got a mailer from the Dream Club with an offer. I got a voucher for 10 free points, which I thought was pretty good. Well, my high roller husband got an offer for two free nights in a hotel for every week in the month of January. We decided that a free hotel was too good to pass up, so we took the road trip with the kids.

I must be honest and admit that in the past when I would see people walking around with their children at Foxwoods, I thought they were pathetic. I mean, come on, they needed to gamble so much that they brought their kids????? Now I understand that for some maybe it is just a free minivacation.


We invited Grammy along on our trip as a way of thanking her for all of the time that she devotes to our cuties. I'm not sure who was more excited, Grammy or Andrew and Natalie. We embarked from our house during a snowstorm to make the trek to CT. We decided to break up our trip by stopping at Imajine That on the way down. We had gone there last year with KJ and Anna, and the kids loved the pretend kitchen, climbing structure, and other activities just as much this time around. 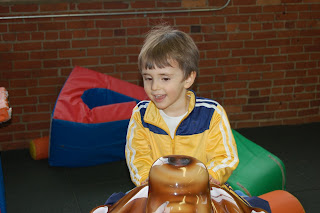 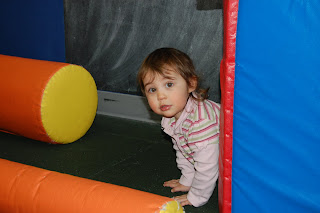 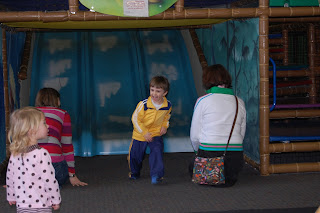 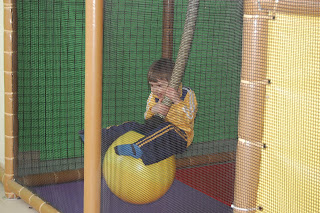 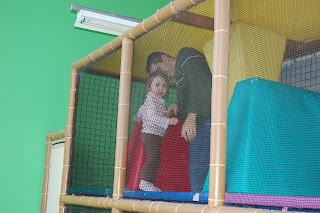 Once at Foxwoods, the kids were amazed. The large open spaces and eye catching stores were terrific and made for lot of fun walks. We were not sure what we would do while in Ct, but once we got there we decided to just stay put at Foxwoods for some free fun. The kids LOVED the escalators. We would just ride up, then down, up, then down, repeatedly. They also had the horizontal "escalator" people movers that were a hit too. To Andrew and Natalie riding these escalators was as fun as any amusement park ride, and it was free!
Aside from riding the escalators, we had two other major hot spot destinations: the pool and the Tree House Arcade. Both kids loved the pool, and both were much more comfortable in the water than they were last summer. Andrew, who previously rarely let go of the side to venture out in the water, plunged right in and swam all over the pool, confident that his life jacket would keep him safe. By the last day he was repeatedly sitting on the edge of the pool and "jumping in" so that his entire head went under water! Andrew even "swam" around in the shallow end without his life jacket on at all. 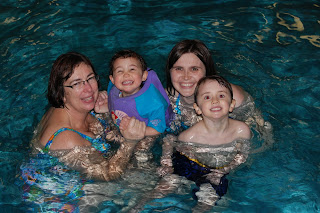 Natalie loved to swim and splash around the pool too. She loved to climb up the steps, then back into the pool, over and over again, and she was Grammy's girl all the way for this. I don't think Grammy minded one bit either!

We also went to the Tree House Arcade every day so that Andrew could play games to win tickets. On one of the first games he played on our first visit, he somehow won 140 tickets! You would have thought Santa was there! He was jumping up and down with excitement as the tickets were fed out of the machine. Natalie, on the other hand, was primarily concerned with putting coins into the slots. She didn't care about the game, she just liked getting the money to go in! Could be pricey :o)
Each night Grammy would retire with the cuties while Pete and I went out to try our luck at the tables. I ended up coming home up a bit which was an added bonus! Thanks for letting us do that Grammy!!!!
My favorite part of the trip, hands down, was on Wednesday morning, our last morning at Foxwoods. Our hotel room was set up so that Grammy had the first bed, Andrew was on the floor in his cool Cars sleeping bag in teh middle, then Pete and I slept in our bed, and finally Natalie was on the other side of our bed in her pack n play. On Wednesday morning I could tell Andrew was waking from his slumber, but I stayed put. He stood up in the dark room and instantly Natalie, who we thought was sleeping, started saying "Hi Bud, Hi Bud". Andrew went right over and proceeded to play with Natalie for another 20 minutes while he thought we were sleeping. They were just so sweet and nice to each other. Any time Natalie would try to call out to us (sleeping in the bed one foot away) Andrew would say "let's not wake up Mommy and Daddy, let's make sure they get all the sleep they need". This probably could and would have gone on all morning if we didn't get up and out of bed!
This was a great chance for us to get away from the grind of daily life and we loved it!
Posted by Tiffany Labels: Andrew, Foxwoods, Grammy, Natalie, Pete, Tiffany