A Valentine's to Remember

So I know this whole blog is meant to talk about the Cardinal family and the adorable little kids, but I just HAD to write something about my fantastic Valentine's Day.

About two weeks before Valentine's Day Norm said that he had something planned for us to do. Naturally, I tried to think of anything and everything that it could be, but I just couldn't figure it out. So yesterday we got up and I gave Norm his present...Katie & Norm OPOLY...and we played that then went to lunch at Kowloons. Norm told me that what we were going to do wasn't taking place until 9:30, which made me even MORE confused...9:30 on a Sunday night?!?! 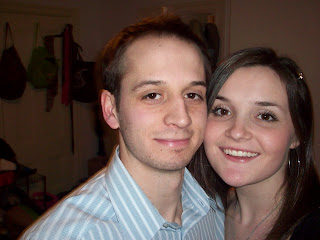 Around 6pm he told me that I had to dress up for the occasion and that he was wearing dress pants - YIPPEE!! As if see my boyfriend dressed up isn't a perfect gift in itself :) Anyways, I put on my cute little black dress and off we went to a "secret" place. We drove on 95 South for quite a while and I was still trying to brainstorm where we were going. About 40 minutes into the drive he says, "here it is!"....THE MELTING POT!!!

For those you who don't know what The Melting Pot is, it's this really awesome fondue restaurant where you not only make your own food in a fondue pot, but also dip delicious treats in cheese and chocolate. It's quite obvious how much my adorable boyfriend pays attention to what I say because I have been dying to go to this place for years!

So we got in the place and it was very cool looking...definitely a modern place. We took a seat at the bar because we were a little early and awaited our delicious meal! What was extra cool that night was that instead of just picking a few (very pricey) things off the menu, it was a special Valentine's menu. After about 20 minutes we were brought to our seats which are literally private booths for couples. It's shaped like an L and it's constructed so that there are walls around 3 sides of the booth so you can't see anyone else eating or walking by...VERY ROMANTIC! Since it was the Valentine's Special we had to decide which of the meals we were going to get....and Norm let me choose EVERYTHING! So we started off with a Cheddar Cheese fondue that had cranberries, walnuts, and hard cider in it. It was PHENOMENAL. They gave us some vegetables, rosemary bread, and granny smith apples to dip in it and it was honestly the best appetizer I've ever had in my entire life. The plates looked like they were from the stone age, which just added to the fact that you were "cooking" your own food and the colored pokers were just SO cool. Oh, and they made the fondue right there in front of you. I thought it was extra awesome when our server, Shawn, was making it and decided he needed just a little more cheese and went and got some more for the pot!

Second course was a salad. I got a spinach salad with strawberries and walnuts and a yummy poppy seed dressing. But lets be honest, with all the food, who's really gonna waste time on a salad? Next was DELICIOUS lemon sorbet over strawberries. Norm thought I was the biggest geek for loving the sorbet so much.

The entree was next an 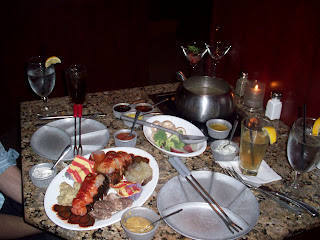 d we choose the "Cupid's Delight" that consisted of lobster, New York strip, shrimp, chicken, sausage, and raviolis. Each of the components had a very unique sauce to go with them. We also got to choose which broth we'd cook all the stuff in, so we chose the vegetable stock. It's so cool that all the meat comes out raw and you get to cook it in the bucket and decide which sauces fit your style. As you can imagine, I was in HEAVEN!!!

After eating the entree came DESSERT!!! We got the "Ying Yang" dessert that was a half dark chocolate half white chocolate fondue pot that came out shaped like the ying yang symbol. We got everything from cheesecake and marshmallows to brownies and rice crispy treats to dip in it. Norm's favorite were the strawberries and bananas! Need 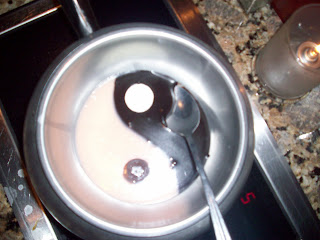 less to say, I think you could have rolled me out of the place when we were done. To top off our meal I got a nice little cup of tea to settle my stomach after such a BIG meal!

Thanks Norm, I love you! 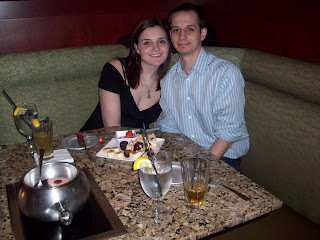