The weekend before Valentine's Day was filled with love in the George household, as Jenny, Rob, and Owen made the trek to NH to visit. Owen was a trooper on the long voyage from Western MA, and even remained awake for a good half an hour on Saturday night once Jenny and Rob arrived. 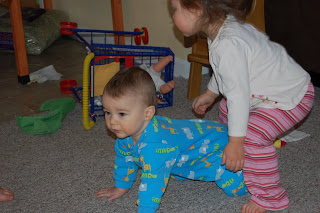 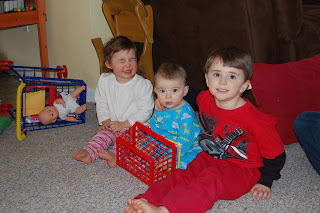 Andrew and Natalie were very excited to have their little friend Owen here to visit, especially since he has now graduated from the "blob" that he was before Halloween to the "creepy crawler" that he is today. Though he only had his crawling skills down for a week, Owen crawled all over the house and was happy to play with all of Andrew and Natalie's toys. Not surprisingly, toys like the plasma car, or any other toy that could cause bodily harm, were his favorites. I think that all of the excitement tired Owen out, because he slept in like a champ both days for his Mommy & Daddy. This was just the icing on the cake for them, as Owen is an excellent, good natured baby from sunrise to sunset. 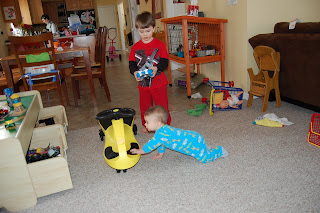 Andrew thought Owen was so cute that he had to find some great photo ops too! 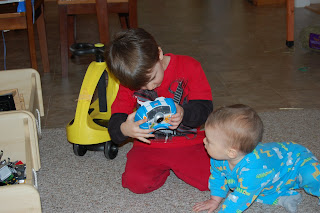 Aside from adoring Owen, Pete and I also had a great time chatting, reminiscing, and playing games with Jenny & Rob. We played a game called Zobmondo and as part of a challenge I had to smear mustard ALL over my face, then sing a tune for 30 seconds. I learned two things from this: it was an abuse of yellow dip and mustard burns! :o)

We hope to take my parents' "Mini Winni" out to good old Easthamptom this summer to catch up with the Hutchisons again. Until then, if you need an Owen fix, visit http://www.hutchisonblog.com/. He is adorable!
Posted by Tiffany Labels: Andrew, Natalie, Owen